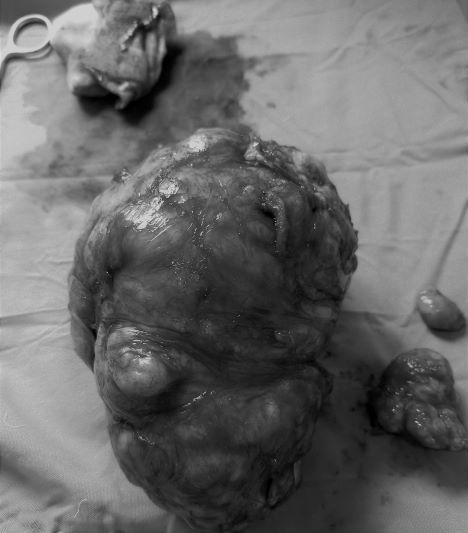 Uterine fibroids can be this big!

Surgery for uterine fibroids is not an uncommon procedure: I have performed quite a number, removing fibroids that are nearing 1 kg!

Fibroids, or leiomyomata (myomas), are common noncancerous growths that often occur in or on the muscle walls of the uterus. One cell repeatedly divides and grows into a firm, rubbery mass separate from the rest of the uterine wall.

Close to 50% of women older than 50 have uterine fibroids. They can grow a single mass or more commonly as several masses of different sizes.

Compared with whites, fibroids are more common in blacks.

The cause of uterine fibroids isn’t lucid: however, several factors make you likely to develop fibroids. These include; genetics (fibroids may run in families), hormones like estrogen, and environmental factors. Being overweight, never having had a child, and menarche before ten years may be risk factors. A fibroid can, but not always, shrink after menopause.

30% to 50% of fibroids cause no symptoms. For those that cause symptoms, they relate to the size and location of the fibroids. Fibroids can grow so large that a woman can look pregnant and develop symptoms of pregnancy: pelvic pressure, heaviness, and increased frequency of urination.

When located in the uterine wall or uterine cavity, fibroids can cause intermenstrual bleeding or heavier and painful periods. Other symptoms may include constipation, backache, pain during sex, and lower abdominal pain. On rare occasions, fibroids cause sudden severe abdominal pain or bleeding.

In many cases, clinicians diagnose fibroids with a thorough medical history and examination. However, they can request for ultrasonography or x-rays, but they aren’t always needed to make a diagnosis.

Occasionally, a hysteroscopy may be needed to assess abnormal uterine bleeding, to plan or carry out therapy.

In many instances, fibroids don’t need any treatment beside only regular checks to make sure that they aren’t growing too large or causing any problems.

When treatment is needed, we can try many medicines that act against hormones. Surgery is another option.

When we need to preserve the uterus for a woman to bear children, we do a myomectomy (surgically removing only fibroids). For postmenopausal women, we perform a hysterectomy.

– uterine artery embolization (uterine arteries are blocked such that they don’t feed the fibroids),

-myolysis (using an electric current to destroy fibroids and shrink blood vessels that feed them), and

-cyromyolysis (here, liquid nitrogen is used instead of electric current).

A few newer medicines are available that may shrink the fibroids, but this change is only temporary.

Don’t delay having children just because you have fibroids. They usually won’t get in the way of a pregnancy. If you do need treatment for fibroids, some management plans can temporarily or permanently prevent you from becoming pregnant.

Don’t worry about getting cancer from fibroids as typical fibroids are not cancerous.

World Heart Day: heart disease prevention, we all have a role to play.

REGEN-COV monoclonal antibody as post-exposure prophylaxis for Covid-19: Who is eligible for the shot?

ProstatRelax Capsules: how to correctly use them for your enlarged prostate!