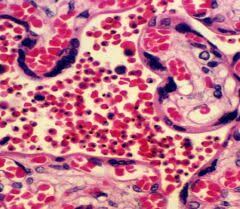 Malarial parasites concentrate the most in placental tissues. In today’s article, we pay special attention to placental malaria and explain why every clinician needs to understand this aspect of the most common infectious disorder in pregnancy. We delve into how the condition occurs, discussing the interplay between the various facets of the body’s defence mechanisms to curb the infection and show how the complications due to placental malaria arise. Let’s get started.

A staggering 24 million women living in malaria-endemic regions become pregnant – rendering malaria in pregnancy a public health threat.
16-63% of primigravidae and 12-33% of multigravidae have placental malaria in the endemic regions. 200,000 to 500,000 pregnant women develop anaemia. About 10,000 maternal deaths occur due to this devastating disease. The disease also contributes to the 3.5 million infants born with low birth weight annually.

All pregnant women must sleep under mosquito nets and receive intermittent preventive therapy if they are living in malaria-endemic regions to prevent malaria in pregnancy (WHO).

The placenta is the interface between the mother and the fetus, it plays an exquisite role in ensuring a successful pregnancy outcome, and more importantly, the successful growth of the fetus highly depends on it.

Plasmodium falciparum-infected erythrocytes sequester in tissues like the spleen and placenta. They infiltrate the immune cells within the intervillous spaces of the placenta. The changes that occur after this infiltration distort the placental architecture that culminates into the altered exchange system between maternal and fetal blood systems.

The interplay between the malarial parasites and white blood cells in the placenta leads to the formation of the malaria pigment. The macrophages engulf the pigment which turns the placenta black. The cytotrophoblasts proliferate, the trophoblastic basement thickens. Following these changes, oxygen and nutrient transport to the growing fetus reduces culminating in intrauterine growth restriction. Close to 62% of placental malarial cases clear up, but up to 5% end up in congenital malaria. It happens when the infected erythrocytes infiltrate the fetus across the uteroplacental barrier.

The infected red blood cells attack the abundant chondroitin sulfate A (CSA) found in the cytotrophoblast. Hyaluronic acid, immunoglobulins in the placenta accentuate the process.

CD36 is an endothelial receptor molecule. It aids infected red blood cells sequester in the systemic blood vessels in the general population.

Surprisingly, the parasites that accumulate in the placenta express molecules that bind to the CSA but not to CD36. These molecules are part of the variants of ligand Plasmodium falciparum- erythrocyte membrane protein 1 (pf-EMP1). Primigravidae lack placental parasite-specific immunity to these pf-EMP1 variants from previous pregnancies, unlike their multigravida counterparts in malaria-endemic regions. It makes these pregnant women, especially prone to the disastrous effects of placental malaria even though they express immunity to the pf-EMP1 variants that bind to CD36. It is, however, untrue for pregnant women living in regions with a very low malaria endemicity, as both are equally prone to the disease (Rick M. Fairhurst, Thomas E. Wellems).

Cortisol hormone levels increase during pregnancy. It is fascinating because this hormone inhibits the natural killer (NK) cell activity against P. falciparum-infected erythrocytes. It leads to an increased susceptibility to the catastrophic effects of malaria in pregnancy.

The body downregulates cell-mediated immunity. It helps the body accommodate an immunologically distinct fetus and not reject.
The body thus mounts little resistance to intracellular parasites like P. falciparum.

Surprisingly, there has been an observed upregulation of the cell-mediated immunity locally in the placenta among pregnant women infected with malaria. It leads to an increase in the concentrations of pro-inflammatory cytokines like interferon-gamma, interleukin-2, and tumour necrosis factor-alpha. Chemokine levels correlate with increased monocyte density, parasite density, and malaria pigment in the placenta.

Chemokines attract macrophages, cytotoxic T cells, B cells, and granulocytes in the placenta. We note that much as there are low levels of high-density lipoprotein cholesterol, there are increased concentrations of triglycerides among pregnant women with placental malaria that often worsens the pathology.

The placental cells must program the death of their infected counterparts (apoptosis) to curb the parasitic effects. Although apoptosis diminishes in many autoimmune disorders and cancer, it increases in placental malaria. We believe that it is due to increased oxidative stress in the placenta. Sulfamethoxazole-pyrimethamine appears to reduce this oxidative stress, as well as apoptosis.

Another factor that appears to play a pivotal role in the chain of events that affect the effects of the infection is what we term heat shock proteins (HSPs). HSPs are produced by cells after a shock or stress event and help them recover. The placenta has many HSPs that aid in its normal functioning and morphology. They are indeed some of the earliest proteins observed during zygote formation. HSPs typically inhibit apoptosis. They include HSP 90, 70, 60, and 25. They usually increase during the malarial infection: their reduction during this illness leads to unchecked apoptosis that culminates into placental infarction and insufficiency.

Placental insufficiency leads to intrauterine growth restriction. Such infants have low birth weights. It increases the risks of congenital malaria and neonatal mortality.

Malaria in pregnancy remains a disease of the developing world. We need to act fast.
Thanks for reading up to the end.

Understanding Obstetric Fistula using the Haddon Matrix: We can prevent this catastrophe.

These Medical Conditions make Pregnancy Very Risky: You should know them.