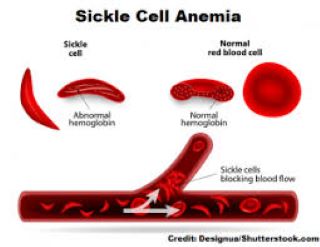 People with sickle cell disease should timely drink water because they are prone to dehydration when compared to the general population. The kidneys suffer catastrophic damage that leads to a progressive inability to concentrate urine no matter the prevailing circumstances. To a lesser degree, those with the sickle cell trait also experience a certain degree of ineptitude to concentrate urine when compared to the general population. The loss of the ability of the kidneys to concentrate urine is what we term hyposthenuria. In today’s article, we explain why they lose such a vital function. We also expound on why such people should timely drink water – and not wait for the body to demand it – because such a demand may be too little, too late in many instances.

The inability to concentrate urine is due to the abnormal haemoglobin S that patients with sickle cell disease possess – that results after inheriting a defective gene from either parent.  It renders the affected red blood cells an inherent ability to lose their disc shape – thus sickling in areas with low oxygen tension or other unfavourable circumstances like infections and dehydration. Available data reflect no defect in the permeability of the kidney tubules or the pituitary vasopressin system.

The urine concentration inability begins as early as six months and progressively worsens with age. Of note, however, it is reversible during infancy up to the age of about 10 to 15 years with multiple blood transfusions. It further shows that this kidney defect is not an inherited structural or chemical abnormality (citation needed). No evidence exists that haemoglobin plays a role in urine concentration.  However, the abnormal haemoglobin S changes the kidney architecture causing irreversible damage to the kidney medulla – a region that reabsorbs most of the filtered water and salts through different patterns – from passive diffusion to active transport.

Blood passes through the kidneys that filter out the toxins like urea, salts like sodium, phosphates, and glucose, and other compounds, including water – beginning a process that culminates in urine formation from the glomerulus to the collecting tubules. The kidney medulla is a hypertonic region. As urine passes through it, water passively diffuses out of the tubules rendering the urine concentrated. The medullary interstitium retains more sodium and urea. It is due to the counter-current ionic exchange in the loops of Henle and medullary capillaries. It thus becomes more hypertonic towards the tip.

Because of the high osmotic pressure, lower oxygen tension, and soaring carbon dioxide within the medulla, abnormal red blood cells’ tendency to sickle potentiates. As early as six months, the sickled red blood cells create a functional defect that leads to an anatomic lesion in the medullary vessels which can reverse during infancy by blood transfusion. Remember that blood transfusion reduces the concentration of circulating sickled red cells – replacing them with the normal ones. As the person grows, this anatomic lesion renders the inability to concentrate urine unresponsive to blood transfusion.

There’s dilatation and distortion of the medullary vessels, tortuosity, and interstitial fibrosis. All these negatively affect the counter-current exchange which, takes place in the medulla that leads to sodium, urea, and water reabsorption.

Due to this anatomic defect (lesion), there’s a progressive failure to raise medullary osmolarity. It is the hallmark of the inability to concentrate urine (hyposthenuria).

In infants and children, studies have demonstrated a rather increased blood flow in the kidney medulla.

The increased blood flow within the medulla reduces the time for the various molecules, including water, to equilibrate in the counter-current loops. It thus limits medullary concentration by decreasing the amount of water removed across the tubules within the medulla. The medullary capillaries thus become progressively deficient at executing the optimal counter-current exchange mechanisms. It culminates in the concentration of urine before it collects in the kidney calyces.

Patients are thus unable to limit urine output in response to the decreased water intake. And hence depend on adequate water intake to prevent dehydration. It is, therefore, imperative that people living with sickle cell disease drink water on time to avert a dehydration catastrophe. Whether the various medications like hydroxyurea, when administered to such patients, reverse the defect is an area that warrants research.

The following papers were resourceful during the preparation of this article. Read them to learn more.

Metformin. Do you think you know it? Think again.

Tocilizumab – the covid-19 wonder drug you may never prescribe (use).