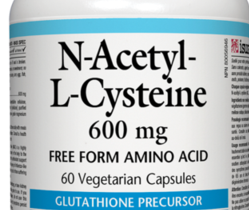 N-Acetylcysteine and Covid-19. It may confer a glimmer of hope.

N-acetylcysteine has, for decades, been used to combat toxicity from paracetamol overdose and sepsis. However, the old guard has excellent properties that may avert the inflammatory chaos we’ve observed among patients with Covid-19. It may, thus, confer a glimmer of hope when combined with other drugs that have exerted a potentially beneficial effect during the management of Covid-19. We highlight these properties and assert the benefits of the forgotten immune-modulating agent.

The Covid-19 pandemic has changed the way we envision health forever. It has crippled the healthcare system on a global scale – regardless of the robustness of such systems. To date, no drug can solely avert the effects of Covid-19 and thus effectively treat it. Globally, clinicians combine medicines to fight the disease that afflicts many but, only a few become ill. Those who become critical may require supplemental oxygen or mechanical ventilation.

The level of immune activation determines the prognosis of those with Covid-19. Death due to Covid-19 usually emanates from progression to acute respiratory distress syndrome.

Following the viral invasion, the level of inflammation that occurs during the early phase of immune response is key to how much lung tissue damage eventually occurs.

Glycoproteins like interleukin-8 attract and activate neutrophils. Neutrophils penetrate the lung tissue, secrete more cytokines, enzymes (elastase) that degrade the tissues in an attempt to fight off the invading virus particles. They produce reactive oxygen species that culminate in oxidative stress. As the neutrophils accumulate at the sites of inflammation, they release their DNA which forms neutrophil extracellular traps. Neutrophil elastase and the extracellular traps destroy clotting factors, plasminogen, and complement proteins. It potentiates the risk of bleeding and blood clots.

Glutathione is a potent antioxidant – a coenzyme involved in oxidation-reductions reactions in the cells.

The cells synthesize it from glutamic acid, cysteine, and glycine. N-acetylcysteine provides the cysteine in the reaction process.

N-acetylcysteine is a potent mucolytic agent – it breaks down mucus plugs within the lungs. It also treats paracetamol overdose. It is the same properties that render it a possible remedy in averting the effects of Covid-19.

Because n-acetylcysteine is the precursor of glutathione, it replenishes its stores within the neutrophils and thus decreasing the ability of neutrophils to produce cytokines, reactive oxygen species, and extracellular traps that eventually lowers the rate of inflammation. Increased intracellular glutathione also suppresses the NF-kB pathway, which further averts inflammation and viral replication. N-acetylcysteine thus modulates the immune responses.

Any drug that achieves such anti-inflammatory effects within the lungs can reduce pneumonia incidence and improve lung function through immune modulation. It is so because the damage from Covid-19 is due to the sudden surge in inflammatory factors in such a chaotic manner that they destroy instead of repairing the lung tissues – the so-called cytokine storm.

N-acetylcysteine may be an excellent adjuvant therapy to other drugs that alleviate the catastrophic effects of Covid-19. You can read more about this medication from Zhongcheng Shi and Carlos A Puyo’s article.

Ivermectin may be beneficial among patients with Covid-19: deductions from a systematic review.