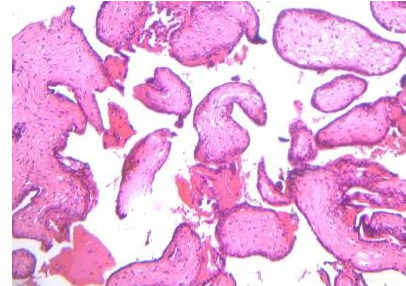 Extensive overlap exists in the histologic appearance of partial and complete moles that even experienced pathologists can have difficulty differentiating them. More issues arise when the tissues under analysis are not moles, but rather a hydropic abortion.

It’s paramount that after a miscarriage surgery, we take any tissues collected for histopathology to rule out abnormalities in the products of conception. Histopathology and immunohistochemistry will always guide through subsequent follow of the patient. For example, close follow up is needed in patients with a complete, partial, or invasive mole with serum beta-human chorionic gonadotropin (β-hCG) titers through 6 months to 1 year whilst a hydropic abortion needs no follow-up – these may share a few similarities.

The details of how and why a hydatidiform mole develops are beyond the scope of this article (you can read about it here). But, we shall present the salient features exhibited by a hydropic abortion vs complete or partial hydatidiform moles. Let’s get this started.

Hydropic abortion, just like a complete mole, but not a partial mole, expresses diploidy, with a paternal to maternal chromosome ratio of 1:1. There may be an embryo/ fetus – often, the patient presents with features of a missed abortion. The serum β-hCG is usually normal or low.

A complete mole also expresses diploidy, but with a paternal to maternal chromosome ratio of 2:0, with an embryo rarely present. Patients usually present with pregnancies whose sizes are larger than the reported weeks of gestation. There’s a very high expression of serum β-hCG titers.

Histologically, there are marked villous enlargement with a relatively uniform population of large hydropic villi. The villi are round in shape and cisterns are very common. Marked circumferential trophoblastic tissues are present.
It is uncommon to find fetal blood vessels.
Complete moles express high KRP but low p57KIP2. Up to 20% of them develop choriocarcinoma.

For a partial mole, there’s an expression of triploidy as opposed to both hydropic abortion and complete mole. There’s a paternal to maternal chromosome ratio of 2:1, with an embryo often present. Pregnancy sizes are usually less than the reported weeks of gestation. Moderately elevated serum β-hCG levels are not uncommon. Histologically, there’s moderate villous enlargement with an admixture of normal villi. They create two populations of villi. They appear scalloped with trophoblastic pseudo inclusions. Cisterns are rare, but fetal blood vessels are common. Immunohistochemically, partial moles express high levels of both KRP and p57KIP2. Less than 5% of patients with partial moles develop persistent trophoblastic disease.

We have made this article to increase awareness about the need to do histology of any suspicious products of conception following an evacuation, with a possibility of immunohistochemical analysis wherever possible. It will always enable clinicians to discuss post-abortion care from an informed point of view.
Don’t forget to share this article with your colleagues.

Post-term Pregnancy: What You Need to Know.

Loading Comments...
%d bloggers like this:
Enable Notifications    OK No thanks
We use cookies to ensure that we give you the best experience on our website. If you continue to use this site we will assume that you are happy with it.Ok