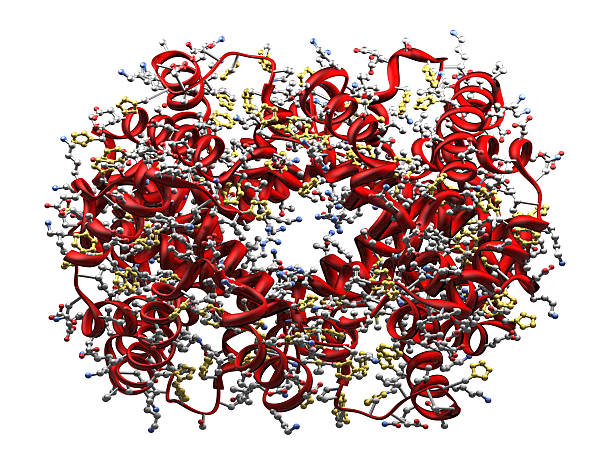 A ball and stick + ribbons model of Human Hemoglobin, the protein in red blood cells which transports oxygen around the body. Getty Images.

Hematopoietic stem cells are known as multipotent stem cells due to their ability to produce all the cell lines. 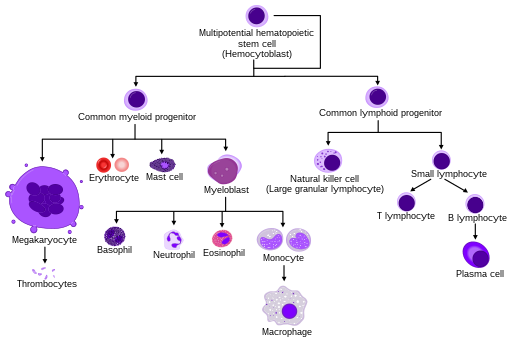 They continually divide: some of the cells remain stem cells: and others commit to divide into myeloid and lymphoid stem cells depending on the signaling molecules involved.

Red blood cells are the most abundant blood cells throughout the body accounting for 99% or more of the cells in the blood. They specialize in transporting blood gases – oxygen and carbon dioxide. 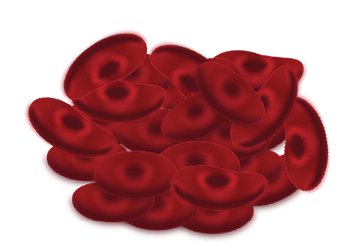 Red blood cells take a biconcave disc shape with a diameter of about 7 – 8µm. The flexibility and elasticity are made possible by the presence of a protein, spectrin which is abundant in their cell membrane. It enables them to squeeze through the various blood vessel sizes without deformation.

Due to the lack of mitochondria, red blood cells generate energy through the anaerobic breakdown of glucose (anaerobic respiration). They have various enzymes that enable them to accomplish this feat.

Red blood cell membranes have distinct molecules (glycoproteins and glycolipids) that determine the type of blood group a person has: red-cell antigens.

About 2.5 million red blood cells are released into circulation every second.

Each adult hemoglobin molecule contains four globular proteins – two alpha and two beta globin proteins and a heme moiety at the center of each protein. The heme contains iron in a reduced form.

Several types of hemoglobin molecules exist – some are normal, and others are abnormal. For instance, fetuses and neonates have a different form of hemoglobin, termed hemoglobin F (fetal hemoglobin). It has two alpha and two gamma globin proteins instead of the beta proteins we find in adult hemoglobin (HbA). We also have hemoglobin C (HbC) and an abnormal hemoglobin S (HbS), which is responsible for some forms of sickle cell disease.

The average life span of red blood cells is 120 days. Beyond this, they become fragile. As they traverse through the spleen, they are engulfed by macrophages and broken down to release the various components that may synthesize bilirubin or new red blood cells.

The number of red blood cells and their various measurement parameters are measured using a complete blood count machine. Blood is usually drawn from one of your peripheral veins in a purple vacutainer and taken to the laboratory for analysis. The machine counts your red blood cell and assesses the various parameters like hematocrit (packed cell volume), and hemoglobin levels. The normal hematocrit is about 45%.

Hematocrit is a physiological parameter that varies from 36% to 50%. It may be due to gender, age, altitude, geographical location, hydration status, diseases, et cetera. Females have a hematocrit of about 37 to 47%: men have about 42 to 52%.

Anemia may be due to reduced erythropoiesis, hemolysis, or blood loss (hemorrhage).

Hemolysis is the breakdown of red blood cells. It may occur due to abnormal hemoglobin molecules like HbS of sickle cell disease, diseases like malaria, G6PD deficiency, and drugs like quinine.

Anemia due to blood loss may follow trauma, ruptured aneurysm (abnormal enlargement in an arterial segment), clotting disorders like hemophilia, during childbirth or miscarriage, or internal bleeding due to a ruptured viscus.

Some people may have abnormally high levels of red blood cells. They have polycythemia (polycythemia vera).

How are white blood cells formed? 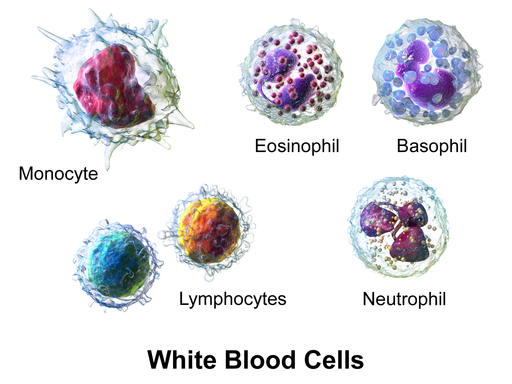 White blood cells, known as leukocytes, are classified as granular or agranular leukocytes.

Granular leukocytes contain cytoplasmic granules made of enzymes and other inclusions. They include neutrophils, eosinophils, and basophils.

Agranular leukocytes contain no cytoplasmic granules. They are primarily lymphocytes and monocytes.

60 to 70% of the leukocytes in the blood are neutrophils. Their numbers increase with bacterial invasion. They phagocytose (engulf and destroy) bacteria. When they die in large numbers, they form pus that we find in the various wounds. They primarily fight against bacteria and fungi.

Basophil levels increase in allergic conditions. At the site of tissue injury, they release histamine that dilates blood vessels. They may also release heparin to limit the blood clot size.

Eosinophils primarily fight against parasitic infections and allergens. They phagocytose foreign cells other than bacteria and fungi. Their levels increase in asthma, hives, and hay fever.

There are three types of lymphocytes – natural killer (NK) cells, T- and B-lymphocytes. They execute most of their functions within the lymphatic system where they phagocytose viruses. They also release antibodies to the various antigens.

The role of natural killer cells is to recognize virus-infected cells, cancerous cells, or foreign cells with alien biomarkers on their cell membranes.

Following division, T-lymphocytes undergo maturation within the thymus where they are primed to provide cell-mediated immunity by directly killing foreign or abnormal cells. On the other hand, B-lymphocytes undergo maturation within the bone marrow and form plasma cells that produce antibodies (immunoglobulins) that confer humoral immunity as the antibodies bind to specific foreign or abnormal markers on cell membranes.

Once released into circulation, monocytes phagocytose microbes, cancer cells, and cellular debris. They often present pathogens to T-lymphocytes. In tissue injury, they leave the blood to become macrophages within the tissues. Here, they extensively phagocytose cellular debris and microbes.

How are platelets formed? 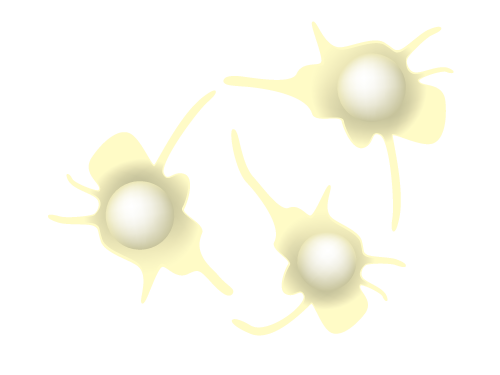 Platelets, known as thrombocytes, are small cell fragments made by megakaryocytes that differentiate from megakaryoblasts. They are pivotal to blood clotting (thrombosis), thus preventing blood loss following a blood vessel injury. In initiating the formation of a blood clot, platelets are crucial in hemostasis. They have a diameter of about 2 to 3µm and range between 150,000 and 400,000/µL of blood.