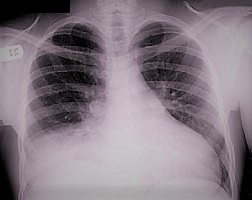 Acute chest syndrome (ACS) is one of the most severe complications of sickle cell disease (SCD), being the second most cause of hospitalization as well as the commonest cause of death.

In a clinical sense, acute chest syndrome resembles pneumonia is every way. The only distinguishing feature is that the former occurs exclusively among people living with sickle cell disease.

That said, ACS typically presents with sudden onset of cough, shortness of breath, fast breathing, chest indrawing, rales as well as other signs and symptoms of lower respiratory tract disease with a new pulmonary infiltrate on a chest radiograph.

Children often present with a fever and evidence of middle or upper lung lobe involvement. On the other hand, adults present with multiple lobes involved, with no fevers.

Commonly, acute chest syndrome is due to an infection, either bacterial, viral, Mycoplasma or Chlamydia.

In the few cases, where there is no evidence of infections, it might be due to;

-aggregation of sickled cells in the intrapulmonary vasculature, or

It is not uncommon for these patients presenting with haemoglobin levels below the baseline.

In many instances, patients with acute chest syndrome recover within a few days after hospitalization. A few others, however, develop a multiorgan system failure where the kidneys, brain, and liver get involved; death can be an inevitable outcome if care isn’t prompt.

Treatment of ACS entails the use of broad-spectrum antibiotics, oxygen supplementation, bronchodilators, and blood transfusions. Whether corticosteroids and other anti-inflammatory agents have a role to play in the management of acute chest syndrome is still uncertain.

The involvement of more than one lung lobe laboured breathing, and the inability to maintain oxygen saturation above 95% despite supplemental oxygen as well as pleural effusions, should signal a severe course of the disease.

Any person who develops recurrent episodes of acute chest syndrome has an increased risk of developing chronic lung disease.

We note that carrying out incentive spirometry every 2-4 hours for a patient admitted for a vaso-occlusive crisis can prevent acute chest syndrome.

With the above preamble about this complication, let’s get to the recommendations regarding its management. Again, we adopted them from the NHLBI.

SARS-CoV-2: What You Should Know.